Diprente Films has optioned Things Unseen by Pamela Power for television in a deal brokered by Catrina Wessels.

Things Unseen, Pamela Power’s second novel, is a gripping psychological thriller set in Johannesburg. It is published by Clockwork Books. 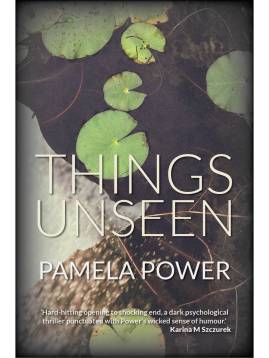 Emma’s quietly unsatisfying suburban life is thrown into disarray when she finds her mother beaten to death, her knickers around her ankles, in the mansion Emma shares with her husband in Westcliff. Police believe it’s an open-and-shut case and peg the crime on Surprise, the immigrant gardener. But Emma is convinced they are wrong.

The men in Emma’s life try to stop her asking questions: Rick, her philandering gynaecologist husband; Ross, her errant and immature brother returned from Australia; and Craig, an ex-lover visiting from the UK who stirs long-buried feelings in her.

Emma’s search for the truth reveals trust to be a fragile and elusive thing.

“Things Unseen is a fast-paced, haunting thriller which addresses our most intimate fears of invasions and violations in the context of present-day crime realities of the country, but also free of the socio-political context.”

“[A]n exciting and atmospheric page turner. While remaining true to the realities that form the South African landscape, and not shying away from issues like crime against women and children, the narrative is cleverly laced with humor, which makes it a delight to read, even though the subject matter is essentially quite dark.”

“I just love finding more and more South African stories that are confidently world-class and comfortable in their genre. This is one of those: a whodunit situated in Joburg […] Pamela Power understands how to keep your attention. You won’t regret this one.”