Sacrificed, Chanette Paul’s English-language debut, places her among “the classiest thriller writers of our day” according to the New York Journal of Books. ​Expertly translated by the acclaimed Elsa Silke, Sacrificed is garnering positive reactions from US and UK readers alike.

Though the novel is lengthy, according to Crime Thriller Hound, it doesn’t sag or drag:

“The settings are interesting and well depicted. The crimes of the changing South Africa and the Democratic Republic of Congo are rife for a thriller and it is a worthy, well-written tale. Race and identity are explored in a thrilling story of political corruption, ruthless ambition and betrayal, with no shortage of heartache. Most of the threads merge and are tied up but there’s enough left hanging, for a part two…”

The New York Journal of Books also hails it a long and satisfying read:

“Despite its length it is a page-turner that will keep you reading long past the moment the midnight oil burns out. It is a thriller and a family saga with heft and portent. The novel thrusts us deeply into the troubled seas of racial identity in pre- and post-apartheid South Africa, as well as into the tragic and chaotic political mix that comprises modern-day Democratic Republic of Congo (DRC).”

Luckily for new readers, there is more to discover. Chanette Paul has published 41 best-selling romance, thriller and crime novels in Afrikaans in South Africa. An immensely popular author, Paul is not only known for her light touch in creating nail-biting suspense with subtle social commentary, but also for sketching strong female characters – women who earn their strength by confronting their demons, both internal and external, and who take full responsibility for their choices.

Caz Colijn, the protagonist of Sacrificed, does just that.

Congo, 1961
A peace-loving man is murdered in cold blood and his beloved is left for dead.

53 years later
Rejected by her parents, her sister, her husband, everyone except her extraordinary daughter, Caz Colijn lives a secluded life in her own little patch of Africa. But a single phone call from her estranged sister in Belgium is all it takes to shatter this refuge.

This phone call is just the first step down an ever-widening tunnel into Caz’s painful past. Jetting between Belgium and Africa, Caz is so caught up in discovering the truth about the past, she almost doesn’t notice the man who is falling in love with her. Or the meaning behind the key she receives. Or the two Congolese who are following her every move in search for something they’re willing to kill for. 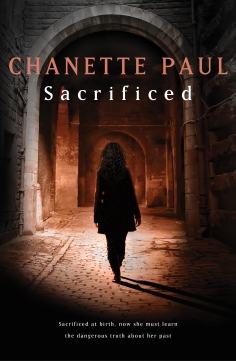